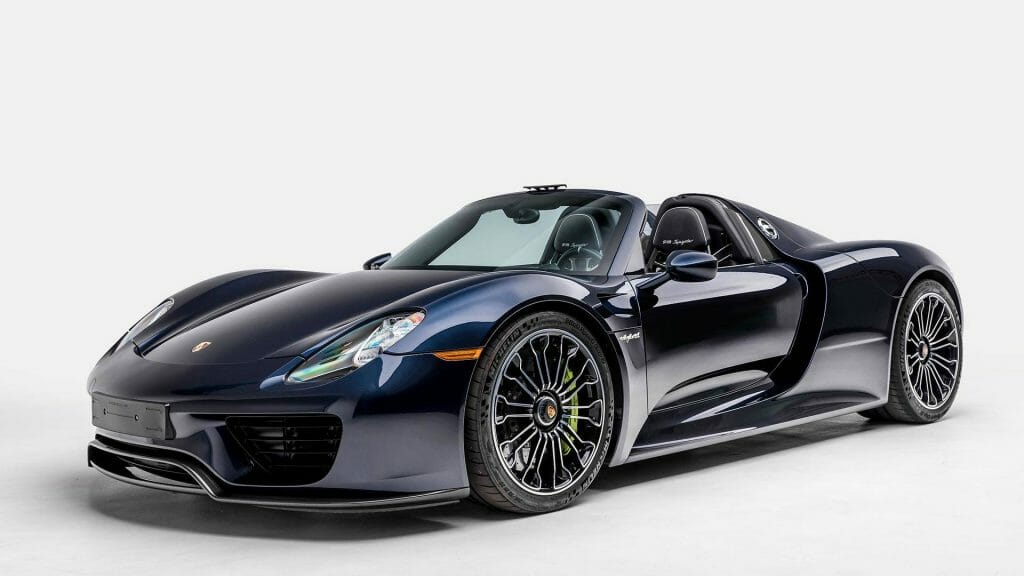 Porsche 918 Spyder – The Best Porsche ever made?

The Porsche 918 Spyder is one of our all-time favorites. Typical Porsche. Pinnacle of the brand. Famous for commands like “Do not pass the factory driver in the 911 Turbo S.” Especially as we like to excel at The Collectors Circle.

With even a cursory glance, the two-seat, gasoline-electric hybrid, with a total output of 887 horsepower, looks to be a masterpiece of engineering that qualifies it as not only the most sophisticated machine Porsche has ever built, but also its quickest and fastest road car of all time.

We and some clients of The Collectors Circle were there when Porsche introduced its 918 Spyder Concept at the Geneva Motor Show in 2010. The sleek, 700-horsepower gasoline-electric hybrid showcar pushed all of the proper enthusiast buttons and quickly garnered overwhelming public approval – the company’s supervisory board approved production shortly thereafter.

The 90-degree, 4.6-liter dry-sump V8 that’s mid-mounted in the 918’s carbon fiber-reinforced plastic monocoque chassis has been further refined to deliver 608 horsepower on its own. The electric motor directly behind it, sandwiched between the engine and Porsche’s seven-speed dual-clutch PDK gearbox, is now rated at 154 horsepower and the electric motor in the nose tasked with driving the front wheels has been tweaked to provide 127 horsepower. All told, total system power has jumped by 92 horses for a new, astonishing rating of 887 horsepower.

Even with a 6.8-kWh lithium-ion traction battery pack on board, nestled low and in the middle of the chassis, the all-wheel-drive 918 Spyder has a curb weight of 1.634 kg (with Weissach Package). The car’s center of gravity is at the height of the wheel hub, with its weight distributed 43 percent over the front axle and 57 percent over the rear. As expected, the 918 Spyder’s performance is phenomenal. Porsche conservatively says the top-spec Weissach model will hit 100 km/h in 2.6 seconds, 200 km/h in 7.2 seconds and 300 km/h in 19.9 seconds from a standstill.

As its competitors continue the battle for performance supremacy, Porsche has again introduced a super sports car that strives for the highest level of technical superiority. Not only is the new carbon-fiber hybrid every bit as historically significant as the 959 that paved its path, it is an advanced look at the excitement of automotive transportation for the next decade or more. Today, we are proud that Switzerland hosts one of the largest crowds of Porsche 918 Spyders and several of our clients of The Collectors Circle have one version of this stunning hypercar in their garage.

Current market price is CHF 1.1 million to 2 million, depending on the extras, conditions and version of the car.

A car like the 918 Spyder is the perfect vehicle for a sunny day driving in your jeans and polo shirt. If you prefer to test the limits of this car, then you might go to the German highway.

What we love about the car:

The 918 Spyder is definitively one of the best Porsche ever made, if not even THE best Porsche. You are not a real Porsche collectors, if you don’t have a 918 Spyder in your garage.